Hey, neat! The NBC Universal store is now bundling my DK Eyewitness Travel Guide to Caprica with season 1.0 on DVD.  Right here, in fact, or just click on the pic.

I just found out a few weeks ago that I'm about to have a new book-type thingy published. 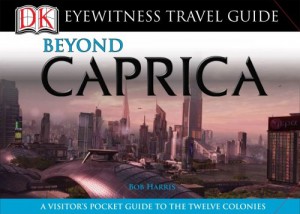 Last year, my dear friend Jane was running Caprica (the Battlestar Galactica prequel), and on the strength of my real-world travel writing and the country summaries in Who Hates Whom, she thought I'd be a good choice to devise backstories for the show's planets (the "colonies of Kobol"), amplifying the existing tangential references in the original BSG into fuller political histories, giving Caprica's writers an internal bible for consistency.

Naturally, I jumped at the chance — this was like being a Star Trek fan in 1968 and being asked to write the show's history of the Romulans for use in future episodes. I didn't figure this would be published, but whoa — turns out NBC/Universal has edited my memo to fit the DK Eyewitness Travel Guide format, licensed the resulting pamphlet with DK, and published a limited run as if it's a real full-color DK travel guide to be released in a limited run at the San Diego Comic Con — but it's also on sale at the NBC store. I don't think this will ever be in stores, so if the show becomes a cult like BSG, it could become a collector's item. Neat!

What really happens when you lend $25 via Kiva.org to help an overseas mom-and-pop business? I followed my own money all the way to clients in Peru, Nepal, Cambodia, Lebanon, Kenya, and a dozen other countries. Do you really get paid back? And does it really do any good?

"Give this book your time. It will pay you back."
Joss Whedon

"An important review of the strengths of microlending and its limitations… a fun read… powerful."
The Boston Globe